At the recent Crisis Point IV event organised by the 'Oracle of Andreivia', otherwise known as Mr Richard Crawley, try saying that in a Tommy Lee Jones voice you get the full Dr Richard Kimble moment from 'The Fugitive'. Sorry where was I, oh yes Crisis Point IV. Over a pie and a pint, as you do at Crisis Point events, we were discussing other games that people were interested in at the moment and Richard C mentioned a set of rules by his good friend Simon Miller called 'To the Strongest' so on my return from Yorkshireshire I read a bit more about the rules and also Richard had posted some info on the rule system and an AAR of a game he and Jamie C had played using 6mm on his http://thelandofcounterpane.blogspot.co.uk/2015/04/to-strongest.html site.

So I took the plunge and ordered a copy and within minutes my inbox pinged with a PDF of the rules from Simon. The main reason for getting these rules was the fact that, a while ago, I purchased an obscene amount of Kallistra Hordes & Heroes 10mm/12mm figures from Mr Peter Andrew Jones (doesn't quite work with the Tommy Lee Jones voice, nevermind) of CWC/BKC/FWC fame. The figures mainly consist of enough figures to fight the Battle of Hastings in 1:1 (well there are alot!!) plus a load of Vikings. They have sat in Shed HQ awaiting a decision on their future. Now recently Pendraken released 'Warband' so I thought some of them could go and form the basis of a Warband army. Great. that still leaves we with a load of figures left. What to do with them? Mr Richard Crawley (stop it now!) mentions 'To the Strongest' and I think mmmm that might work.

So after a quick skim through the rules it was off to Shed HQ (while cooking gammon, roast potatoes, cauliflower cheese and broccoli, who says men can't multi task) to get some figures. How to base them? With the amount of figures I have got I would like to go for the mass effect as they will look impressive on the table top. The rules use a grid system, no measuring, and looking at the rules the games I will probably play will use either the 100mm square grid or the 150mm square grid for bigger games. So I have come up with a few basing options and I would welcome peoples opinions on what would look best. Bear in mind when looking that you can have two units in any one square so there needs to be room for both. I cut a couple of squares from card and used some bases I use for CWC. 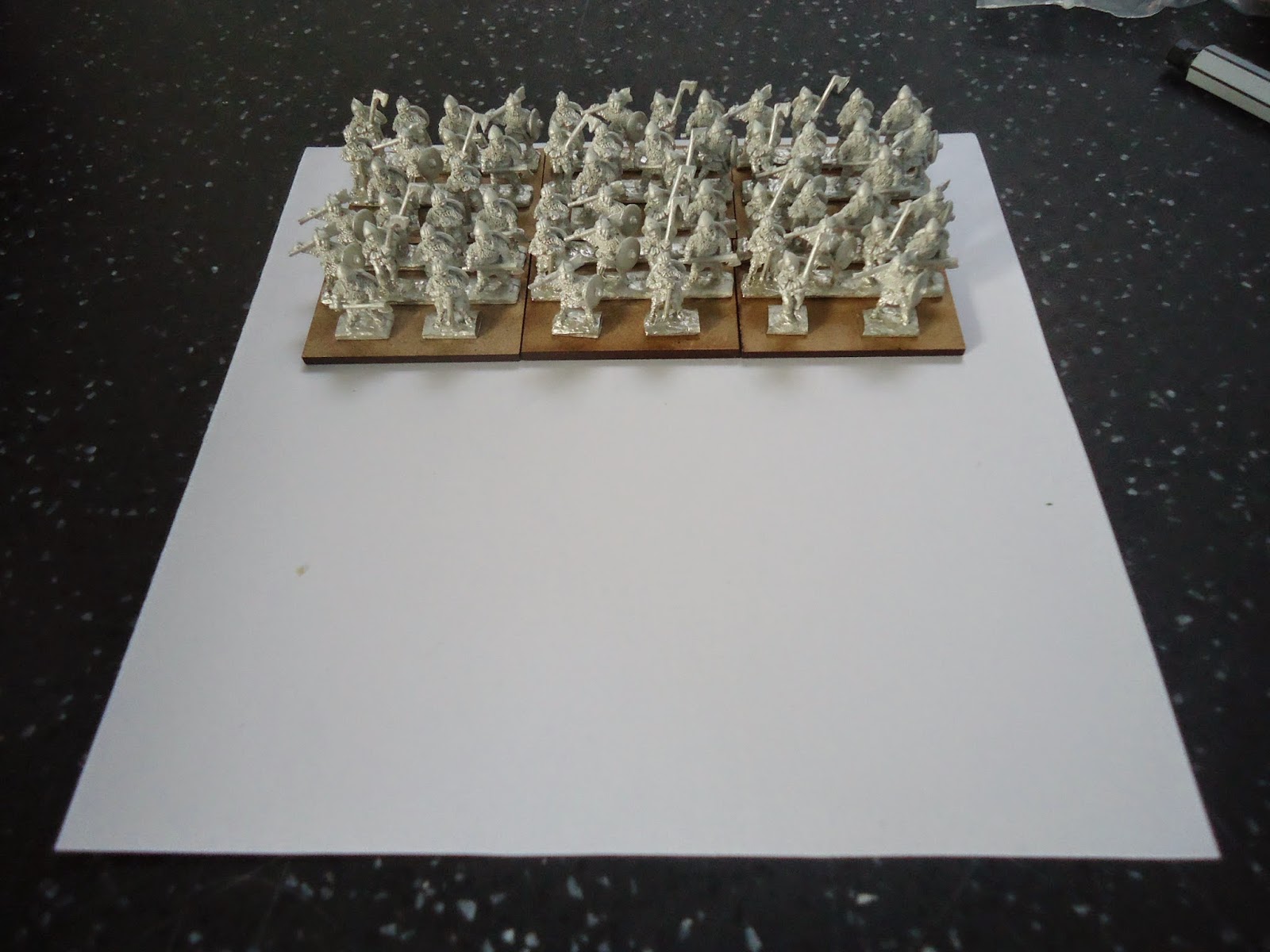 150mm Square - 6 bases 40mm x 30mm with two ranks of four plus a couple of figures at the front. Like the massed effect not sure about the amount of space taken up. 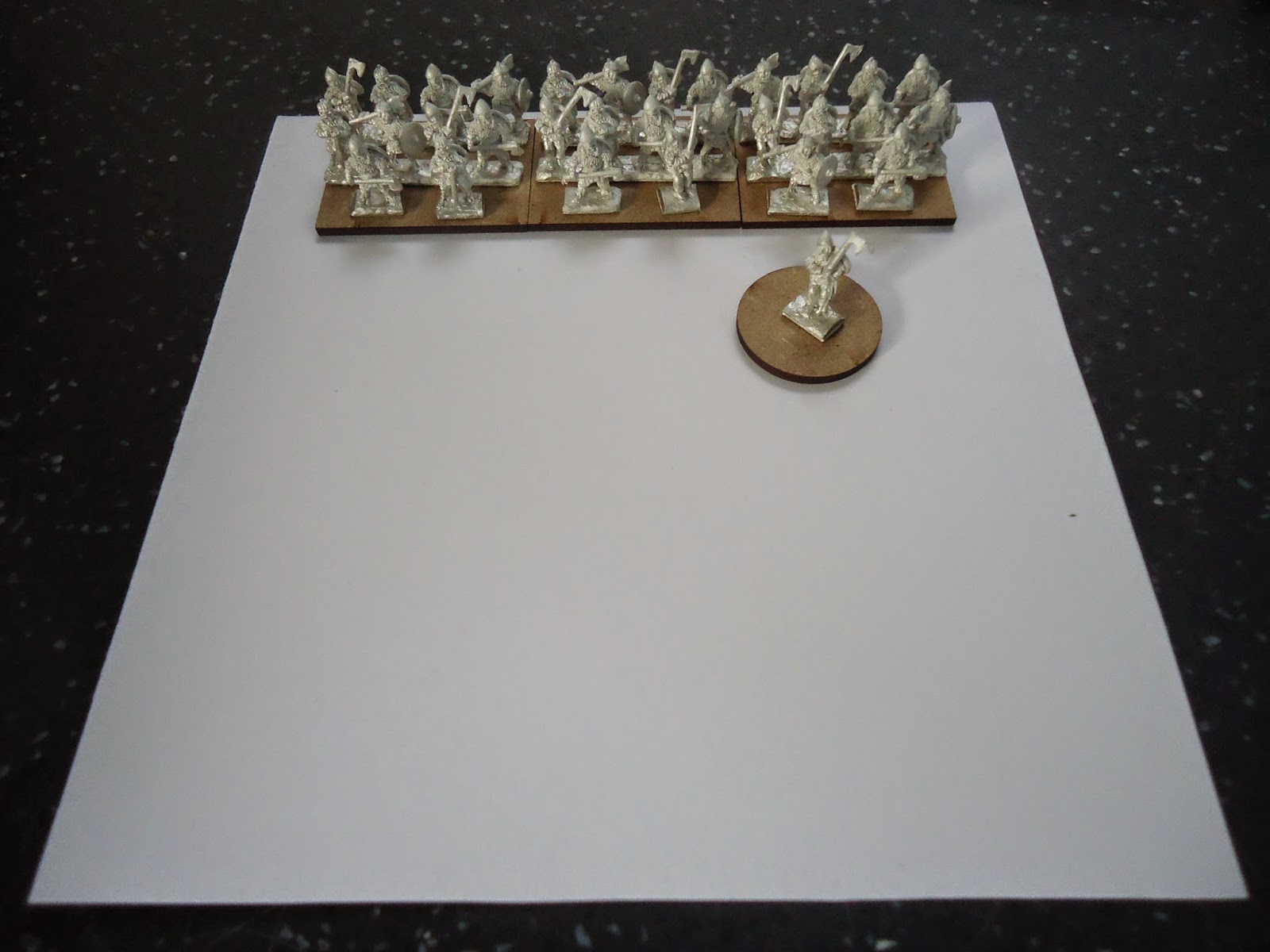 150mm Square - 3 bases 40mm x 30mm with two ranks of four plus a couple of figures at the front. Again like the massed effect and there is a bit more room in the grid square for a leader base. 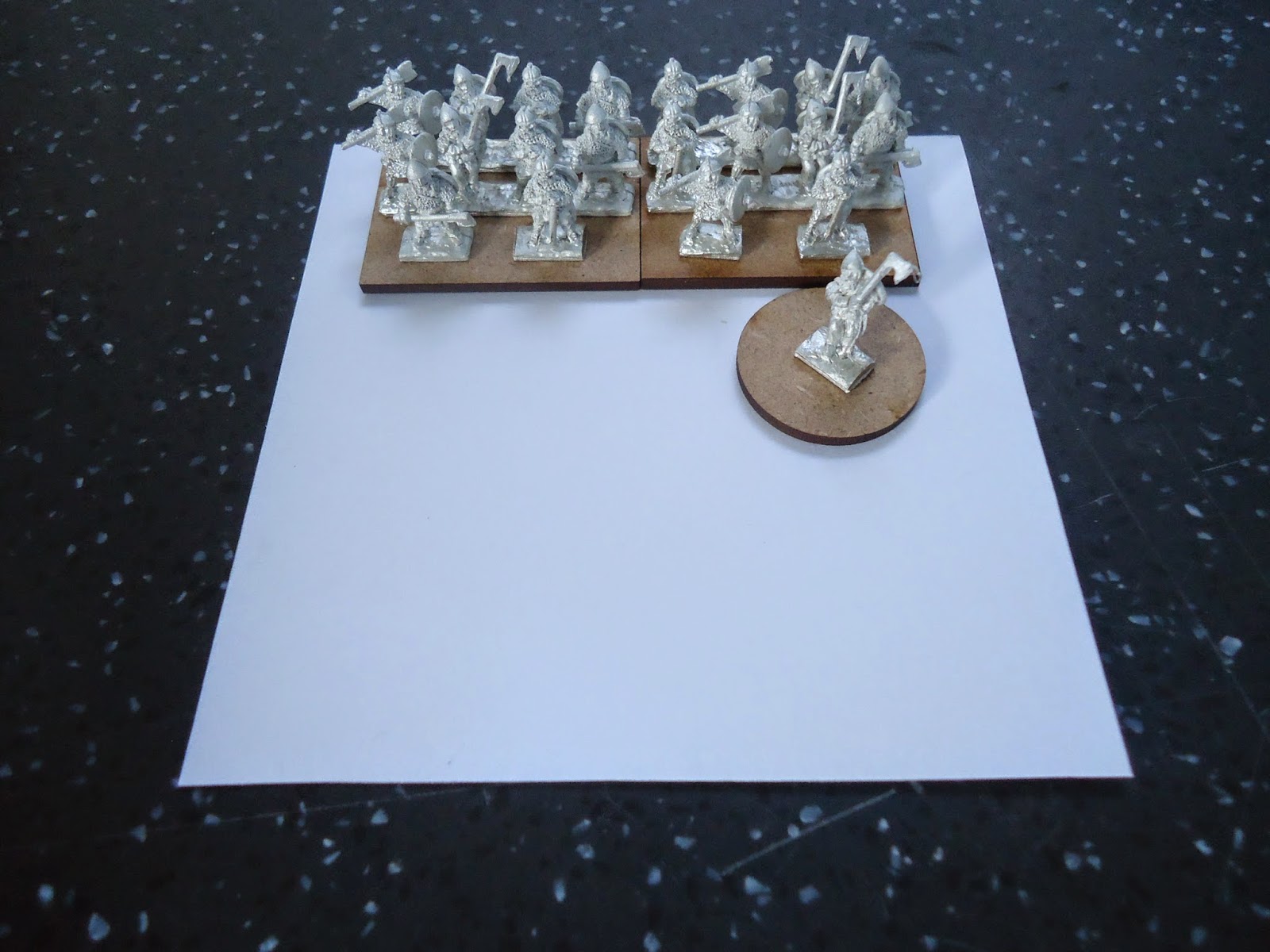 100mm Square - 2 bases 40mm x 30mm with two ranks of four plus a couple of figures at the front.
Using the smaller grid the bases work with a leader. Probably just enough room for another unit. 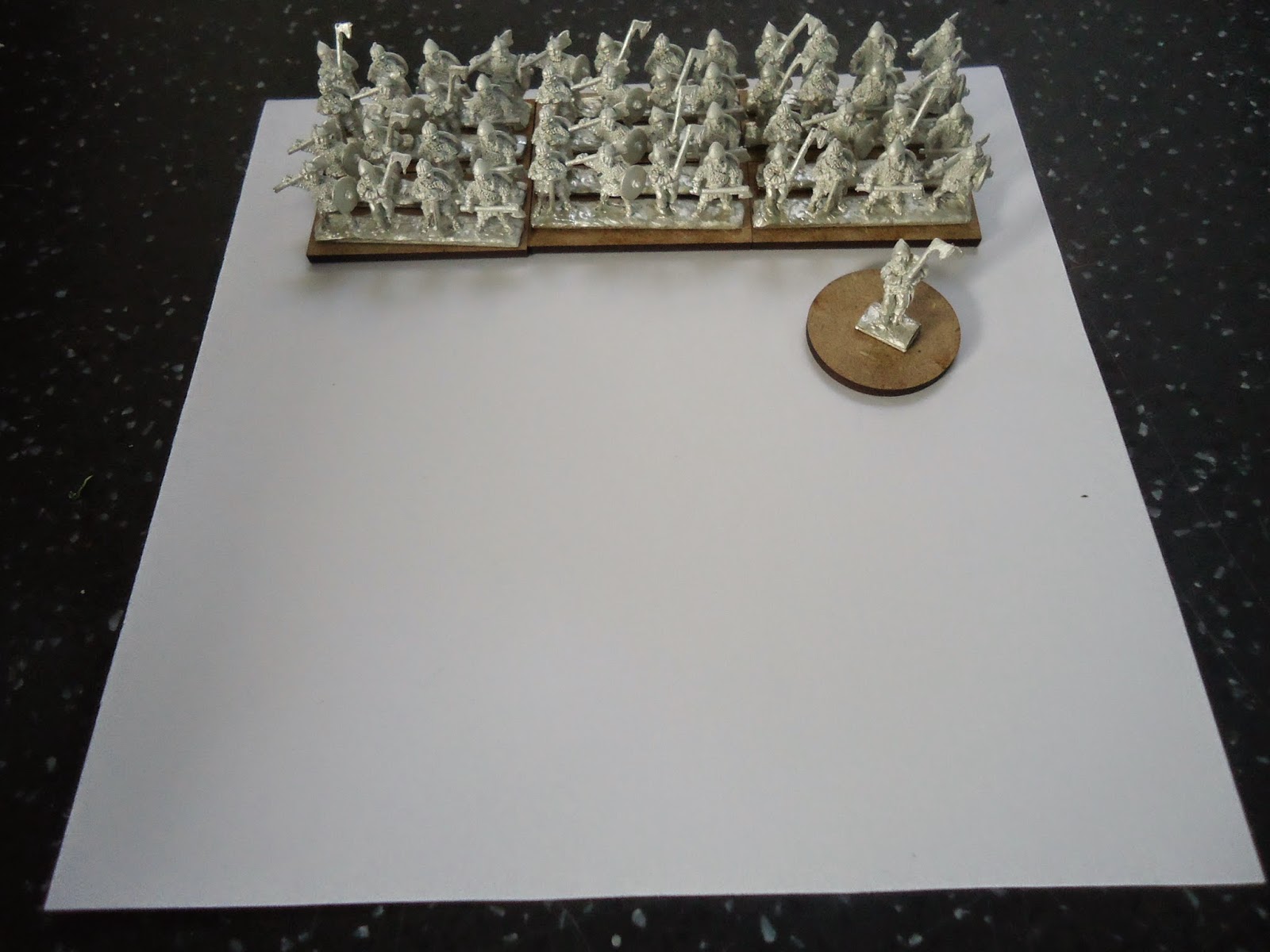 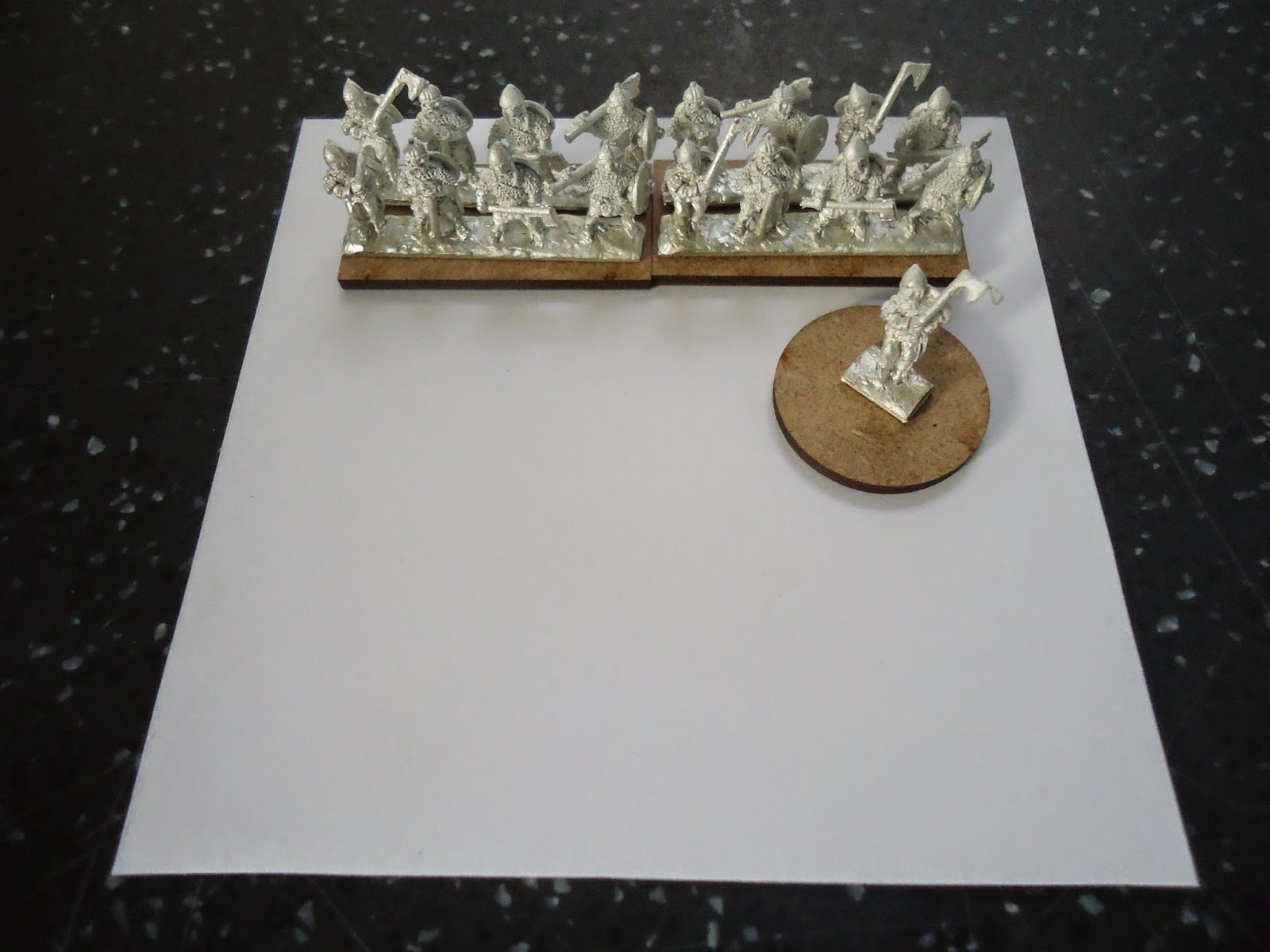 Interested to hear what other people think, now to work out what to do with 23,426 Norman Cavalry figures :-)

P.S. I managed not to burn the tea either. Brownie Points off to Shed HQ.

Email ThisBlogThis!Share to TwitterShare to FacebookShare to Pinterest
Labels: 10mm, 12mm, Kallistra, To the Strongest, TtS